The BMW F30 ActiveHybrid 3 was launched in Malaysia late 2012 together with the F10 ActiveHybrid 5. Both cars received a welcome shot in the arm early this year when the Malaysian government recognized both cars as energy efficient vehicles resulting in a tidy price reduction of 26% and 23%, respectively from its original launch prices. Externally, the test car can easily pass off for any other BMW F30 3 series on the road. Since this is a ‘Sport Line’ model, some of the external finishing include high gloss black on the window bars, kidney bars (on the grille), front and rear bumpers and chrome black on the dual exhaust tail pipes. Those who have a keen eye for detail can easily spot an ActiveHybrid 3 from the other conventional F30 3 Series. The ‘ActiveHybrid 3’ lettering is prominent at the rear boot and at both C pillars. The car also comes with a uniquely designed 18 inch streamline style alloy wheels to minimise wind resistance. Tyres are 18 inch (225/45 R18) Goodyear run flats. 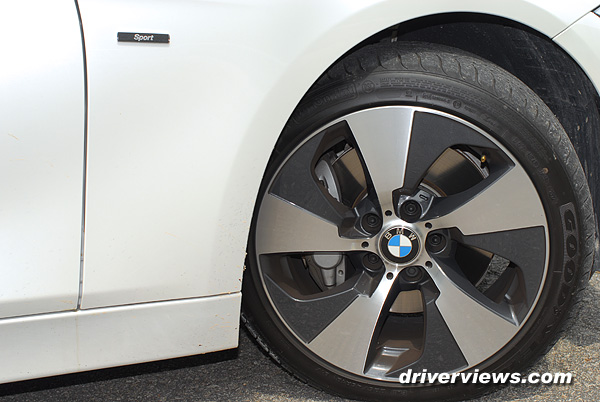 The test car is a fully assembled unit (CBU) painted with a ‘White Mineral’ shade, which from a distance appears white but on closer inspection is actually metallic white. Included are a number of premium features not commonly found in a F30 ie. a full colour heads up display, comfort access system (ability to unlock the car by touching the door handle with car keys in your pocket), an electrical sun roof and a Harman Kardon surround sound system with 600W and 16 speakers. Fit and finish in the cabin was up to the required BMW standards. There were no issues with the various pushbuttons and switches which were well placed, solid and had the required firmness that gave an assurance of durability and reliability. The leather seats with contrast red stitching were very comfortable, plush and had good support at the right places. I only had a smattering of information about the car before the test drive. Perhaps this may be a better approach as there are no preconceived notions. One of the surprises that we found out in the days after obtaining information on the specs was the displacement, power and torque of the powerplant was much higher than we thought. 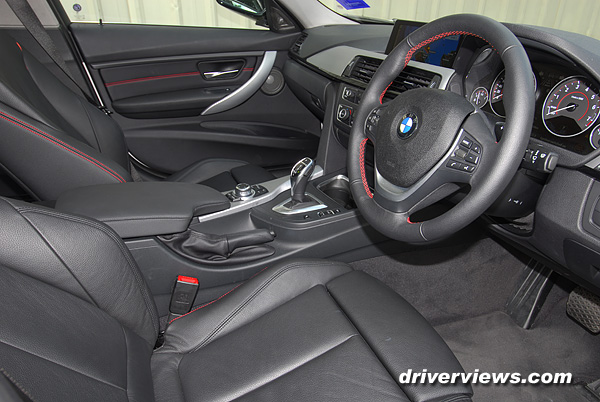 During our initial run on the North South expressway heading north, the car felt like it was working hard and slow to pick up speed. Similar inputs on the accelerator vis-à-vis the earlier F10 520d did not yield the same push and immediate response. In fact, I had to depress a bit further on the accelerator to get the car going up to speed during the initial runs on an upward gradient expressway. Maybe the car had been dormant for sometime and needed some running in. In the subsequent days, the car’s response improved. 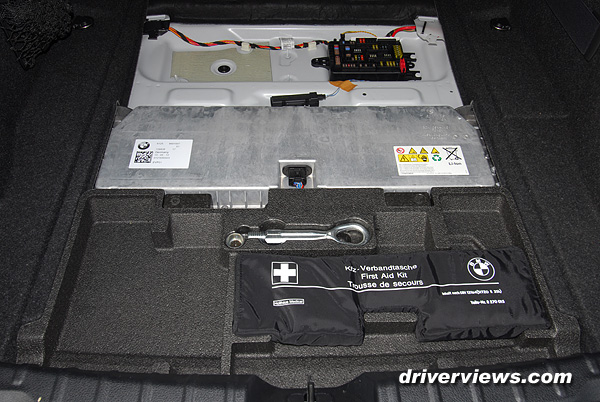 Perhaps one of the contributing factors is the weight of the car. This ActiveHybrid 3 is around 200kg heavier than a conventional F30 3 series. The additional weight is contributed by the hybrid system, the lithium-ion battery, the electric motor etc. With already 2 persons in the car during the test drive, the additional weight was roughly equivalent to carrying a further 2 adult passengers. 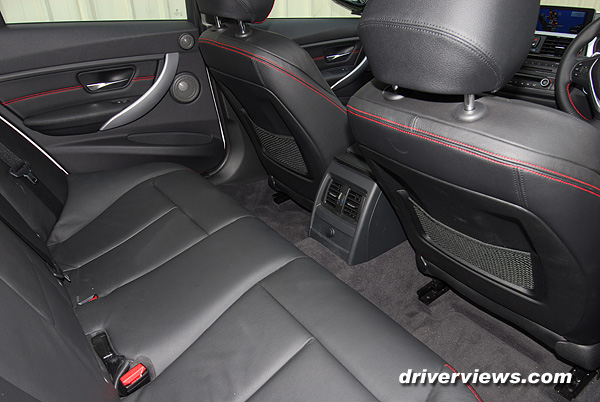 Our test drive for the ActiveHybrid 3, took us a combined 700 plus kilometers heading towards Penang from Kuala Lumpur. This was probably the most mileage we had covered so far over a period of 3 days, traversing through and fro on the North South Expressway and diving right into the twisty roads of Batu Ferringhi, Teluk Bahang and Balik Pulau in Penang. Cold starts in the morning, fires up the internal combustion petrol engine. This I think is to help charge up the lithium-ion battery and to warm up the entire powertrain. Once the desired charge and temperature is reached, subsequent ignitions is redirected to the electrical motor. This will take some getting used to as there is no rumble and just a faint sound of the cooling fan. The only indication inside the cabin is that the needle gauge on the tachometer will move up to the ‘Ready’ position. Push the gearlever towards the “D” or “R” position and this ‘silent’ car is ready to go. However, this is not for long before the petrol engine kicks in after a short push from the electrical motor. If you are driving at the default ‘Comfort’ mode (via the Driving Experience Control), you will hardly experience the silent ride offered by the electrical motor save for the initial acceleration from a standstill position. To experience an extended drive on the electrical motor, you will need to actively modulate your inputs on the accelerator and drive at the ‘Eco Pro’ mode. Even then this is a little bit of a cat and mouse game. Push a bit harder and the petrol engine kicks in. Take your foot off from the accelerator when coasting, and the petrol engine might switch off momentarily with zero rpm. I was able to drive some short distances (at zero rpm) on the electric motor right up to 60km/h. It is obvious that this ActiveHybrid 3 is not designed to run for extended periods on the electrical motor. The 40kw electric motor appears to complement the main N55 petrol engine, providing intermittent inputs to smooth out the rough edges. During acceleration at the lower gears, the transition from electric to petrol can be felt by a slight push, a rise in engine note and an upward flick of the needle gauge on the tachometer. During each drive, the lithium-ion battery appears to take quite a long time to reach a fully charged state. From my observation, power from the battery appears to be used up by the electric motor fairly quickly as well. Transmission is an 8 speed sport automatic with the option of gearshift paddles on the steering wheel. Gear changes are seamless and smooth with the exception of the initial first gear from a standstill position where you can feel a slight push. One of the key strengths I found on this test car was the superb handling from the electric power steering. There was a great balance of weight and maneuverability, a real step up from the relatively light steering feel on the F10 5 series. The steering on this ActiveHybrid 3 is very precise, enabling the driver to be able to steer accurately along the driving line. For even more weight, one can opt to drive on the ‘Sport’ or ‘Sport+’ mode but at the expense of higher fuel consumption. Ride quality on the ‘Comfort’ and ‘Eco Pro’ modes was good as the car soaked up many of the imperfections on the road with ease and transmitted little if any of the harshness to the cabin. The only drawback was that the insulation inside the cabin needs to be improved. At higher speed cruises we could hear external noises and prominent engine note of the N55 poweplant when it was working hard. This tends to drown out the music that was coming from the loudspeakers. Sound quality from the Harmon Kardon Surrond system was generally okay. It did not sound like a major step up from the usual generic sound systems that come with the current crop of BMW cars. Our experience with the Navigation System Professional (GPS) via the iDrive system in Penang was a mix bag. It was able to lead us to major destinations without much fuss but there were also times when it got a bit confused and led us to dead end roads. Selling the concept of the BMW ActiveHybrid 3 to consumers will be a bit of a challenge. It is not entirely a pure Hybrid vehicle unlike some of the other cars on the road in Malaysia (notably the Japanese brands) which compete in terms of fuel efficiency. This car will need to find its own niche, riding on selling points such as its advanced engineering technology, premium branding and high specifications.